Well I’ve been using Comic Zeal since day one of the ipad release, but looks like it no longer works with ipados 16. Sad day for me. But maybe not! I’m looking for a new reader and I like all I hear about panels (except the subscription model). I used a program called iMazing to extract my whole collection from Comic Zeal. It produced a folder for each issue, which is full of jpgs (the comics ie one issue per folder)

In so doing, it also removed any sorting I had done, I previous had top level folders for manga, horror, kids, etc. But that is all gone, I just have a huge folder maybe up of issue ‘folders’

Any tips for how to import this? I wonder if I can import the folder, or if I have to zip each folder for it to be recognized. Also, the whole collection is about 400 GB (yes large I know, but the portable comic collection is my sole reason for owning an ipad)

Once imported, I’m going to need to organize this quite a bit. Does panels have some helpful options, or will everything by 100% manual?

Thanks for helping a newbie out, I’m excited to join the community!

I recommend zipping each issue’s folder (and then changing .zip to .cbz, so its associated with comic apps instead of unzipping). You can probably find or write a script to take care of it for you

If you’re comfortable with doing some work on the command line you can probably take a lot of the hard work out of it, but unfortunately I think you’ll end up doing plenty by hand, depending on how much you want to do.

If you just want to turn the folders into .cbz files then have a look at this article (How to zip multiple folders into separate files [Full guide]), specifically the second heading “Use Command Prompt”. They have an example of a batch file that will use 7-zip (which you should install if you haven’t got it). It looks like it will turn a folder full of subfolders into individual archives.

You’ll then have to start organising all your files, but hopefully that will be the hard part done.

If you want to try and get metadata into the archives as well, and the files/folders are named in a sensible fashion that might also be possible. I knocked together a python script to do that years ago. It worked ok for my case, and I can share if need be, but no guarantees on how well it would work for your case.

One note here: @dani added support for zipped folders. Previous versions of Panels would only accept individual comics (pdf/cbr/cbz), but with latest version you can zip a folder containing other folders and comics and send it to Panels. 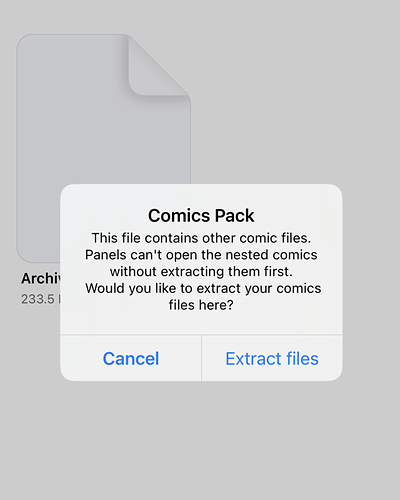