So I have a bunch of CBZ files. Some work and some don’t. There isn’t much information out there on the errors, which is a bit meh. Wish the errors were more descriptive so I could try troubleshooting.

Anyway. I’ll attach an image so you can try help 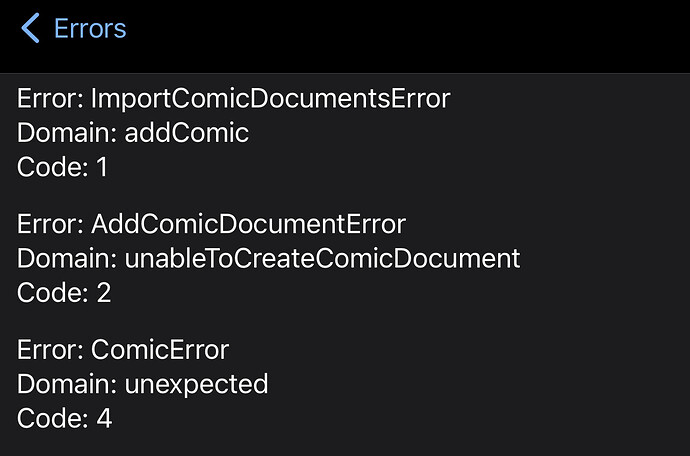 Thanks, this is helpful

Could you send that comic file to us? DM or support@panels.app

I just looked into it. There are two reasons they don’t work.

The only solution, at the moment, is to double-decompress the comic and compress it again using zip or rar.

I’ll keep the file you sent us as a use-case example. I’ll use it to tests the support for 7-zip + nested compressed files.

I hope that makes sense

Sorry. I zipped it to try make it smaller.

I’ll look into them being cb7 and see what I can do. It’s odd as it was downloaded as a cbz. I’ll update. Thanks for checking

I zipped it to try make it smaller.

Oh! gotcha! only the second part applies then.

It’s odd as it was downloaded as a cbz

Yeah, sometimes comic files are distributed with the wrong extension

Actually… Panels tries all the supported formats when it fails to open.

It ultimately fails because we don’t support 7zip at the moment. Otherwise it would have worked even if the extension is cbz.

Hopefully, we can add support for 7zip very soon

Thanks for the heads up! I have now managed to get this working. It would be nice if you could make the error messages more descriptive, if it pumped something like “wrong file format cb7, should be …” that would have helped me troubleshoot.

Either way. Thank you!

100% we’ve been historically quite bad at error feedback. We need to improve in that area, for sure. But you know… it takes a lot of time that we normally spend on the happy path…

I get it. I’m like that with my code at work