Importing via Drag-and-Drop through iMazing

So before I discovered Panels, I used to use Chunky. One way I would import a bunch of comics was to use the Windows version of iMazing. First, in iMazing, I’d create a shortcut for the Chunky app. I’d just connect the iPad to my PC, launch iMazing, and click Create Shortcut, and I’d get presented with options based on the apps on my iPad.

I could drag-and-drop comic files from a Windows folder into the Chunky app shortcut in iMazing.

In Panels, it’s a little less obvious, but it does work. I drag the comics into this app shortcut 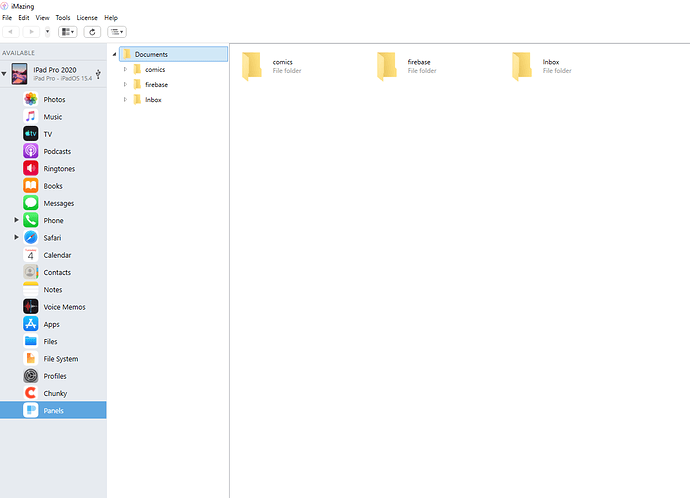 After that, the comic file shows up in the library.

Just thought I’d share that. To the developers, please don’t break this!

(iMazing is not a free app, but I’ve never regretted what I spent on it. It’s much easier using iMazing to manage file transfers from Windows to an iPad or iPhone than through gasp iTunes!)

the next version of Panels will make this a bit easier. The Documents folder in the current version is not meant to be accessed directly.
In the next version, we are opening the sandbox container and allowing users to manually organize the content folder.
Each folder will represent a collection in Panels.

We aim to release it within the next few weeks

Fantastic news! As good as the touch interface is, it will definitely be a bit easier to move things around in Windows with a mouse. You guys do a great job in developing the platform.

Out of curiosity, do you work in scrum/sprints? I’m an Agile Product Owner, and love hearing how different dev groups are using Agile or other methodologies.

Out of curiosity, do you work in scrum/sprints?

@victor and I build Panels in our spare time

We don’t use any specific methodology. We create tickets in github issues and work on stuff until the feature is ready to ship.

Well, it’s working! Keep it up! I’m grateful for all you two do!