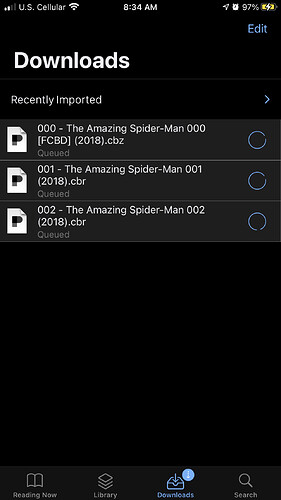 Multiple comics are stuck in Downloads queue. I tried every import option and the same files end up in Downloads tab with Queued written underneath and a spinning circle. Other files go through without issue though.

I tried .cbr files and .cbz files that work fine on other devices, I tried reinstalling the app multiple times.
I imported multiple files earlier today with no issues, but certain files just refuse to work.

Are you importing from a server ? Or using built in web address import ? Reason I am asking is I’ve had that issue before and usually if I save the comic to files then import from that it works. Or if all else fails airdropping from another apple device.

I was using both the server through the app and Google Drive, but I found a work around that has seemed to work. Just more tedious.

Hey folks. We’ve been chasing this bug for a while without any luck. Can’t reproduce it. We’re unsure if it’s related to file formats, a bug in the app or something else…

The work around was to go back and redownload the original file. The new download would seem to work, while the old one would not even though they were the same file.

I would be more than happy to share a couple of the files that would not work. Just let me know how to do that.

Thanks @Chas that’s really helpful. We think that the problem is a bug in the app that handles incorrectly some of download/decompression errors. Instead of transitioning to a Failed state, they appear as Queued and get stuck indefinitely.
Last night we sent a new build to Apple’s review. As soon as it gets approved, we’ll release a new Testflight. We’re also improving the error reporting to give you better information about the error nature.

I don’t think it’s necessary that you send us those files. But if you do it, we’ll give them a shot to make sure they work as expected. You can send them to us attached to an email, or you can send us any download link on any platform (Dropbox, WeTransfer, GoogleDrive, Mega… ). Whatever works best for you.

We just released a Testflight aiming to mitigate this issue. https://testflight.apple.com/join/LSWXTgan We’ll be testing it and gathering info for a couple of days before sending it to the AppStore review.

If you still need them, I emailed the file to y’all. The subject line should be the same as this topic. I really appreciate the work y’all have put into this app. It’s definitely the most used app on my phone!