Hi, you haven’t heard from me in a long time. I’m the guy that has nearly a terabyte of comics in his Panels library and uses dummy .cbz files as text separators to organize. I also use them to make “paperweight“ icons to make it easy to spot stacks of a given superhero in my mile-long library (see the Capt. America example in the screenshot).

The attached screenshot is of the very top of my library. You’ll notice that the text separators (basically one-page comics I made) have the underline that indicate a completed comic. These are an eyesore as the design of these one page separators uses a black background and the system font and are meant to blend in as if they are a behavior of the app itself. I have been unsuccessful in trying to remove the purple bar (purple only because of my chosen theme).

Would you be willing/able to make it impossible for Panels to display a single page comic as completed? Or, better still, adjust the “Mark As Unread” command so that it works on single page comics such as these? Oddly, this behavior is inconsistent. Further down the library there are occasional separators that are not marked completed and I have been unable to determine why this is.

Thanks, love the app. Use it everyday. Just wish my separators didn’t/couldn’t mark completed as the are not really comics. 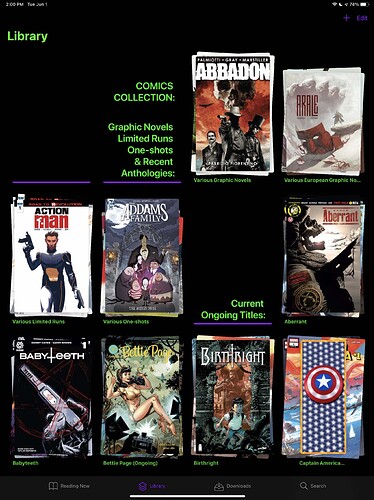 I honestly want the same thing if my request regarding collections won’t push through. As I am in the same position, I actually had to split some of my comics to multiple iPads because it ws getting unwieldy to manage something in the hundreds of GB let alone multiple terabytes. Or at least change how collections work so they help with the visual clutter.